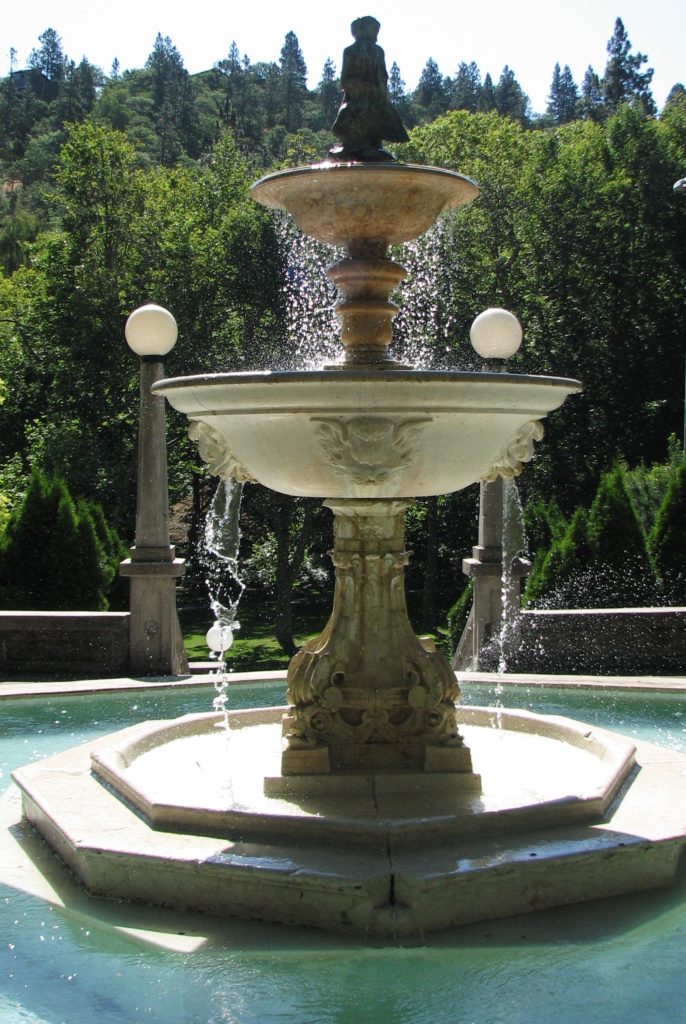 The Butler-Perozzi Fountain was given to the City of Ashland by Gwin S. Butler and Domingo Perozzi in 1916. Sculpted in Italy out of Fiori di Peschi (or Flower of Peach) marble, the fountain is situated on a dedicated terrace near the sycamore grove and the Butler Memorial Bandshell.

The fountain was sculpted by Antonio Frilli, who specialized in Belle Epoque subjects and contributed several large statues to Stanford University. He established an art gallery in Florence that still operates today. Butler and Perozzi found his delightful fountain at the 1915 San Francisco Panama-Pacific Exhibition and purchased it for $3,000, a considerable sum in those days. They brought it to Ashland where a separate concrete foundation was built to house it. A stone staircase was also erected for easy access to Granite Street.

By the late 20th Century, the fountain was obscured by overgrowth, and the sculpture was deteriorating. The Verona marble the fountain is carved from is quite soft (for marble), so especially vulnerable to the elements.

In 1987, the Park’s Planning Director John Fregonese commissioned Ashland sculptor Jeffrey Bernard to restore the sculpture. Bernard had studied in Italy and was able to obtain some Flower of Peach marble to restore the pedestal and statue. He refurbished the original four gargoyles and foliage on the lower bowl of the fountain and created bronze replicas of the cupid and water-spouting swan. The original marble cupid and swan fixture was removed and stored at the Public Library, safe from the further deterioration of time and weather. Water flowed from the swan's spout, and lighting illuminated the jewel of Lithia Park once more. 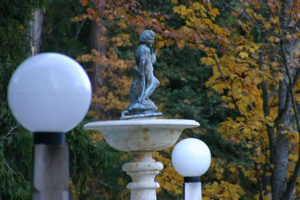 It was a massive, years-long effort by the City, many nonprofit groups, and individual contributions from the Ashland community who supported the restoration financially and otherwise.

But now the fountain needs help again. The entire plumbing system needs repair and modernization. The concrete structures that surround the fountain look fine from a distance, but show great wear and tear closeup. The Ashland Parks Foundation is working hard to raise funding, but we only have about half the money needed to restore and preserve Butler-Perozzi. We need the Ashland community to rally once again to save the fountain.

The Ashland Parks and Recreation Board of Commissioners is accepting public input and will be holding public meetings on how to move forward with the project. See more information on that process on the APRC website.

We need your help to protect the Butler-Perozzi Fountain. Let's save our jewel, together.

Donations are tax-deductible in accordance with applicable laws.

“Enjoying the contemplative beauty of the historic Butler-Perozzi Fountain just a few minutes from the hustle and bustle of town is the very definition of public art.”